After reading the Mont-Ka book it wasn’t long before I decided I had to make may own version of The Eight. With 8 strong characters to model it seemed a shame that the ‘official’ team uses stock models (excluding Farsight of course). Whatever the Onegar Gauntlet is it’s clearly invisible! Likewise Brightswords’s Fusion Blades states “they are, in appearance, heavily modified fusion blasters.”, but they look typical on the model. 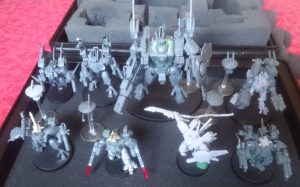 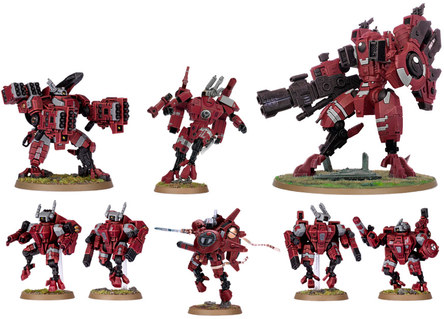 So much cutting and kitbashing later. Here’s my take on the Eight.

Nothing much to do here. This is the Citadel Finecast Farsight so it took ALOT of cleaning. Then just a bit of green stuff to pad out the stone underfoot to make him actually stand upright!

Starting with the Iridium XV8-02 from the new Crisis suit boxed set this was a fairly “stock” build. I imagined Bravestorm to be the second in command, so I tried to pose him in a leadership pose, pointing to direct units. I found a suitably “leader” head from my spares box to finish it off. The other main change is to use the XV85 thrusters to give him a bit more bulk. 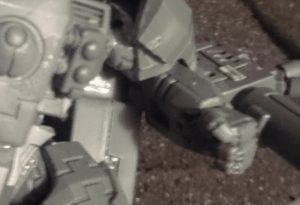 As well as the Iridium armour, Bravestorm’s other systems are a Stim injector and the Onegar gauntlet.

For the stimulant injector I cut one of the miscellaneous suit systems to make what I imagine to be refill ports for the drugs.  And adjusted to make it look like the pipework feeds into the suit.

The gauntlets are the new XV85 Commander suit hands. I toyed with elbow rockets and various other OTT ideas, and finally decided that a simple pair of oversized (the XV85 hands look big on an XV8) fists would work. Because they are often described as glowing or bright, I’ll paint these in the same Bronze effect that the disks on the sides of the jetpacks usually use.

Brightsword’s aggressive ‘attacking from the forefront’ style called for a mean looking suit. Using forgeworld legs with feet from the classic metal Broadside to give it a stocky tough look. Even the helmet has a forward facing “charging you” antenna! The pose is meant to be inspired by Wolverines *skikt* pose, with the fusion blades deployed.

I placed another stimulant injector refill port on the chest, and then started on the fusion blades.

Yes those are Lego Lightsabers.

I drilled out the ends of the fusion blasters to insert the rods. Hopefully once painted and with some weathering and scorch marks, they’ll give a lightsabre hot-blade effect.

In all the artwork Sha’vastos seemed to me to be the most under represented, and the most like a regular crisis suit.
But looking at the loadout, he’s meant to have a Vectored retro-thrusters!

So by cannibalising the spare XV86 parts from the new XV85 Commander set I’ve given him huge thruster assemblies and some extra fins to stabilize.

I wasn’t sure how to reflect the Puretide chip, after all it’s not visible. So instead the targeter on the left shoulder and the command style head are meant to reflect some of the extra data gathering and communication facilities he would need to formulate his strategies.

Half my work was done when GW pushed out the new plastic XV85 kit. To make Arra’kon stand out I added the counterfire defence system and repulsor impact field.
The RIF I envisioned to be a field projected by the two dishes. Forward field from the chest projector and rear from a mounting behind the head intake.
For the CDS I imagined an advanced markerlight tracking system. So combining the accessory that most looked like sensors, with marketlight pieces and spare weapon parts I fashioned a sensor suite.

I must confess, Ob’latoai was the first of these conversions and the one that most inspired me to start.

I wan’t to try to reflect that Ob’latoai is old. So I decided to begin with a Forgeword Broadside rather than the larger new kit. I figured this slimmer suit also reflected slightly the fact that there’s no need for a pilot bay anymore. However the old missile arms just didn’t fit the bill. So in with the new chunky broadside arms and missile pods.

I also found the foot meshed well with one of the skull piles and this let me have a nice “braced” pose. And its not GrimDark enough if you don’t have at least one member of your army crushing skulls underfoot!

Next I tweaked the head just to differentiate from stock and add more sensors. Added a targeting array to represent the velocity tracker and a magnetised seeker missile.

Finally if Ob’latoai 9-0 isn’t in the pilot bay where is he? Of course, he’s in the advanced “Drone” AI mounted on the rear.

Torchstar was another I was looking forward to making. She *loves* flames. And I figured that regular fuel supplies just wouldn’t cut it.
So combining old+new flamers, and modeling a connection from stretched sprue to extra tankage on the jet housings. Jet fuel burns right? 😉

Then I modelled a marketlight to make the Neuroweb system jammer on the left shoulder. I wanted something that, like a marketlight, wasn’t a gun, but did project something onto the target to jam it.

Various accessories on the center mount and right shoulder then make up the target lock and multi-spectrum sensor suite.

Finally the biggest and yet less obvious conversion.

I took the “Earth Cast Piloting Array” description very literally. When it says “built to accommodate” I followed suit and the main torso has been cut and filled with plasticard to make it about 1cm wider. I figure that ought to accommodate even the largest Earth caste member!

With various extra antenna and sensors to represent the extra data that Earth caste can process (and the Early Warning Override) and two AI cores to help process the data available.

For Brightsword’s Warscaper drone I’ve used the Forgeworld technical drone. It looks like a shield drone and also has lots of sensors to represent the scanning technology in the drone.

The drone of the left (center drone for size comparison) was the result of a passing comment remarking how the drones look a bit like mini Enterprise’s. A bit of hacking later and you have the NX-1701 Gun Drone. I’ll probably make a few of these just to have something a little different for The Eights drones.

So there you have it.
I still need to trim some molding lines, and do some sanding and minor fills. Then off to basing and painting!
I think I’ve managed to pull personality into these characters and capture their essence. Hopefully once painted they’ll stand out more than stock models would and really look like a team of T’au heroes.

Will post another update when they look all pretty!

++ THOUGHT FOR THE DAY: Innocence proves nothing… ++

++ THOUGHT FOR THE DAY: Ignorance is bliss ++

++ THOUGHT FOR THE DAY: Honor is what a pure mind knows about itself ++