Recently I’ve noticed that this article about the “Insidiousness of Facebook Messenger” is doing the rounds again.

I get that people worry when a company gets too big. But there are enough real problems without looking for secret conspiracies. #facebook

So here’s the full force.

Facebook does have issues. They do retain a lot of data, for example when you type in the status box but then delete it, they note you changed your mind (but not exactly what you typed). They are quite open that in future if/when possible they’d like to track the deleted text content too.

And that’s the crux here. Facebook track every interaction you make with Facebook. They do this to try to learn what you like/dislike so they can show you more of the first and less of the latter. And so they can then target adverts at you better. If the advert is more likely something you like – and seen while reading a news post that you also like – you’re more likely to click through.

And that’s how Facebook make money. How much did you pay for Facebook? At last time it was reported (August 2012) Facebook had over 180,000 servers. It’s likely to be far far more now. This hardware and the expertise required to maintain it – let alone the development staff needed to develop it – run to a bill of over $80 million a month – based on Facebook’s claim it costs over $1bn a year to run.

Facebook trades in data.  By collecting every scrap it can it build a profile and then use that to target adverts at you.

Many people have an instant knee jerk to that profiling. Yet in their wallet they carry a Nectar card, or a Tesco clubcard, or some other loyalty scheme card.

It has always astounded me that people who complain at even having to give a Surname or date of birth to a website, are quite happy to let Tesco record every item they buy.  Think about that next time you have to do some sensitive shopping – a tube of piles cream, a cheap copy of 50 Shades of Grey.  Don’t be surprised if you buy burgers, buns, relish and insect replant – and receive offers on BBQs in an email later that week.

Facebook have time and again been show to be overaggressive on data collection. This is true, data is the currency you are using to pay for the service. But they have enough real flaws without unwarranted knee-jerk panic reactions.

The Huff article frequently make reference to Terms of Service. Yet they list the “Application Permissions”. These are not the same thing. It’s just that the phrase “Terms of Service” is scarier sounding that app permissions. There is no Terms of Service agreement that pops up to accept like an EULA would do. The ToS are, like almost all other services, just a link at the end of the setting page. They link to Facebook’s general ToS that interestingly hasn’t been changed since November 2013.

So what are application permissions?

Firstly note that the Huff article is now 20 months old…  that list is way out of date.

Also, it’s interesting that the Android app has been targeted here. On iOS there is no app permissions to agree to – just find in app store, add the app and run as usual. No scary popups there.

Over on the Android platform, every app has to request permission to use certain features of your phone.  The camera, network, SMS, contacts etc.

“But it says at any time?”. Yes it does, otherwise every time you tap the record message button you’d have to click yes or no on a popup saying “Messenger wants to access the microphone now?”. That would get annoying real quick – Microsoft got a lot of flack for that when they introduced UAC with similar constant popups back in Vista.

“How about reading and access to SMS?”. Facebook sends verification texts to prove your identity and increase security. By detecting the SMS, reading it to verify the code and then deleting it, it automates this process without you having to copy and paste codes about. There is no permission for “access SMS from a certain number” only “access all SMS” so they have to use that permission.

The Facebook messenger apps permissions aren’t too dissimilar to many top end apps. Indeed the number of permissions is more a mark of how well the app integrates with your phone and contacts than any measure of privacy violation.

Compare this to a popular mobile game… 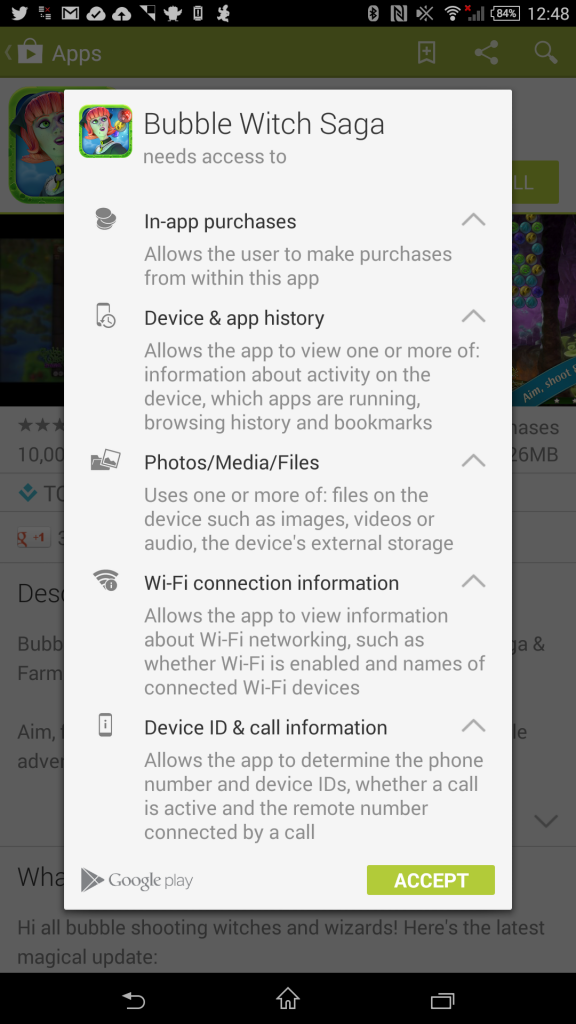 ++ THOUGHT FOR THE DAY: The common man is like a worm in the gut of a corpse, trapped inside a prison of cold flesh, helpless and uncaring, unaware even of the inevitability of its own doom. ++

++ THOUGHT FOR THE DAY: All our ignorances bring us closer to annihilation. ++

++ THOUGHT FOR THE DAY: The word of the Emperor is the rule of the Imperium ++