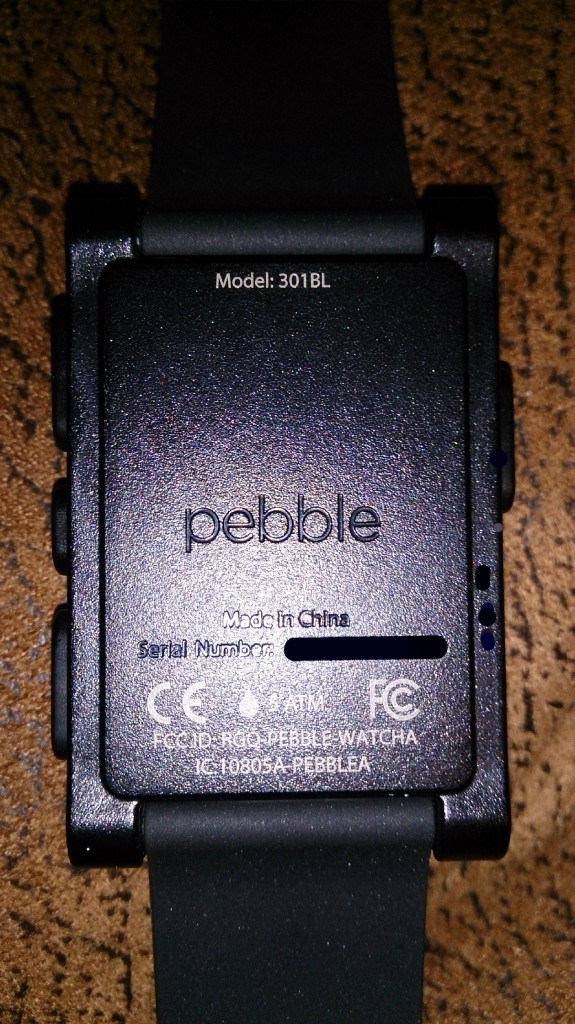 I’d been eyeing up the Pebble Smartwatch for a while and after much unsubtle hint dropping I received an early Christmas present. I thought now would be the perfect time to post a review based on real-world usage and living with it, instead of just first impressions and a quick play.

This pebble was purchased direct from https://getpebble.com/ via the express delivery option to here in the UK – and it arrived in just 3 working days, impressive! However, it did arrive in a Pebble branded package which was good for me as I got to open it early instead of waiting a week for Christmas Day, but bear that in mind if you’re ordering it as a present for someone in the same house.

So what exactly is it?

Describing what the Pebble Smartwatch is is a bit trickier than you might expect. “Smartwatch” gives an expectation that the watch doesn’t quite live up to in some ways. It’s a term which makes people think of a having a small Smartphone strapped to the wrist, but there’s no touch screen for one thing. The Pebble doesn’t try to replace your phone. It’s even better than that – it works with your phone.

Despite it’s rather chunky size for a watch, a touch screen would be too fiddly. 6th gen iPod nano users can probably confirm this – it’s hard to multi-touch if you can barely fit more than one finger on the screen! It doesn’t try to duplicate the functions of a smartphone, because you already have one of them. Instead, Pebble extends your phone in a simple and useful way: delivering your notifications to your wrist. Sure you can get apps to play games, control music, preview your phone’s camera and so on, but that’s not the Pebble’s raison d’etre. Its primary purpose is to give a little vibration on your wrist that you wont miss, and to show a simple notice on-screen.

What’s in the box?


Opening the box felt similar to unpacking an Apple product. Nicely presented, with the product in pride of place; the supporting contents nicely tucked away. Plus, there’s no overwhelming you with large, weighty manuals.

At first I thought the USB charging lead was a bit chunky at the watch end, but the magnetic grip works well and the size works in its favour – removing any fiddlyness when connecting to charge.

Setup was a breeze, with a dedicated area of the website (go.getpebble.com) to guide you through pairing the watch and installing the partner app on your phone. Soon I had my Android XperiaZ connected and giving me notifications. Within the hour I was trying out different watch faces.

So after spending just over 5 weeks with the Pebble, how is it working? Very well, thanks for asking!

I quickly found that the default Android app “only” sends a limited set of notifications: phone, SMS, email, events, Google Talk Facebook and beta WhatsApp. But not, for example, Twitter. Apparently the iOS7 app for iPhone has no such limit and integrates heavily with the Notifications system, to allow sending of any notices.

However all is not lost, as the Android app market has been quick to flood Google Play with helper apps. I quickly found Pebble Notifier. Just tick the apps you want to receive notices for on the Pebble, make sure to set the official Pebble app to allow 3rd party notices, and voila. It’s even better than the beta support in the official app for WhatsApp.

On the watch side, I quickly found a few sites including mypebblefaces.com to find watch faces. Using QRCodes to let me easily install faces and apps on my mobile was a clever and useful touch.

Being the geek I am, I also quickly found the new 2.0 SDK for Pebble. My Pebble was upgraded to the beta shortly after. After a brief hiccup when I didn’t realise that 1.0 apps and watch faces are NOT compatible with 2.0, I found and installed my favourite, and now primary watch face: Fuzzy Time.

The chunky buttons are easy to find and use, yet recessed enough to prevent accidental triggering. The e-paper screen is perfectly readable in daylight without the backlight. And as this is e-paper NOT e-ink the refresh rate is still a healthy 30 fps when needed. The shake to light became so instinctive that asking me the time caused me to shake my wrist and look even when I wasn’t wearing the watch! Similarly the waterproofing was invaluable as I’ve found my it so comfy I forget to take it off before washing up!

There’s been a lot of talk on the bottom half of the internet about the Pebble’s battery life being “shorter” than advertised. The box says “5-7 days*” the * being a notice that it depends upon the apps used. I agree with this. Because of the aforementioned Pebble Notifier app, I get more than the “typical” number of notifications to my watch, yet I’m still finding I’m using only about 10-15% a day. So 5-7 days is a good estimate in my experience.

What I did notice is that having a watch face with a second-hand – or similar frequent updates, say an app that uses the Bluetooth connection to pull data frequently, will cause the battery to drain quickly. The e-paper screen is at its best when you have a face with a low-refresh rate. Fuzzy-time, for example, only needs to update about once a minute.

On the phone side, apart from the persistent “Your Pebble is connected” notification I would barely know it’s connected. Apparently the Bluetooth connection causes about 10-15% more battery drain on your phone but I’ve found that this balances out. I’m a heavy user of my XperiaZ and I drain the battery quickly at the best of times. But since getting Pebble it’s been lasting longer. How can this be? Well,  let me explain how Pebble has changed the way I interact with my Smartphone.

Before Pebble, if my phone buzzed it would get picked up to see what notice was there. I’d see an email or a tweet, open the app, see other content. I was then engaged in my phone, and would look at all the notices and calls for my attention it was issuing forth. Often the notice was for some silly fremium game trying to get me to tap to get my megafarmcityvillebucks or something else. I would still pick up my phone and even if I ignored that notice, I’d perform a series of “whilst I have the screen unlocked tasks”. For example, “Oh I’ll just check my email” or fall into browsing the Twitter timeline…

Now, how things work with Pebble. My wrist vibrates. I glance at my watch. I judge whether its important/time sensitive. Far more often than not, I just click to dismiss the notice.

I haven’t fallen into the trap of engaging in my phone and there’s little to distract on the pebble itself. Two important things occur. Notifications now barely derail me from my workflow; my attention stays on the task in hand. Secondly, I haven’t turned on the power-hungry screen and back lights on my phone.

In my experience, I’ve found that the extra power used by Bluetooth is far exceeded by the power saved from the screen in this way.

I did fear that “spammy” notices might become an issue, but they are so easily dismissed that I have even enabled more notifications to my pebble. Whereas before spam might trigger engagement, now it is so easily ignored that I am less strict about which apps are permitted to notify me.

There are some features I wish I could have on the Pebble, but these are minor compared to the benefits I’ve found it brings me.

I do wish there was a native option to vibrate if the Bluetooth connection is lost so it reminds me if I walk too far away from my phone. Something similar to this bracelet, for example, as apps/faces offering this option drain the battery quickly.

It tells the time (easy to forget this one!).
Quick notifications.
Waterproof.
Highly customisable.
Easy to use, simple UI, with decent buttons to interact with.
Long battery life (if you avoid some power-hungry apps).

Pebbles Official Android app is less integrated than iOS. But this is easily covered with a 3rd party app.
Apps and Faces can be a bit confusing with some requiring “helper” apps;  they are less than clear about this.
Varying quality of apps. Pebble have announced an app store so hopefully this will allow better vetting by the Pebble community.
Size. It IS a bit bulky. Personally I like it, you might not so much.

I got mine from getpebble.com and it’s now about £95 ($150) and about £15 (£25) for speedy shipping. As mentioned earlier, if you are getting it as a gift remember DHL ship it with Pebble branding on the package.

It’s good value for money, easy to get started with and has changed they way I use my smartphone for the better. With most of the cons being software related, expect them to be addressed in the future. 9/10.

++ THOUGHT FOR THE DAY: Duty prevails ++

++ THOUGHT FOR THE DAY: Study the alien, the better to kill it ++